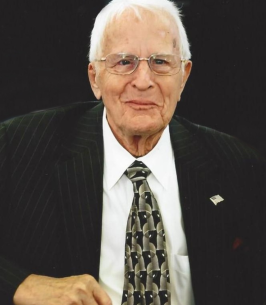 William “Bill” J. Timm, 92, lifetime resident and former Alderman with the City of Rockford, IL, passed away peacefully with his daughters by his side on October 6, 2022, at Serenity Hospice and Home, in Oregon, IL, after a short illness. Bill was born on December 10, 1929, in Rockford, the son of William A. and Rose (Slapinski) Timm. He graduated from Cathedral of Saint Peter Grade School and Saint Thomas High School, Class of 1948. Bill began working at Mead’s Meat Market, and then as a driver’s license examiner for Illinois Secretary of State from 1957 to 1959. Later, he went on to a 40-year career with Smith Oil Corp., where he rose to the level of operations manager. Bill married Barbara Schmidt on September 12, 1959, celebrating 63 years together this year. Bill and Barb, along with his brother and sister-in-law, Howard and Ginny Schmidt, were co-owners of Hultberg’s Gift Shop for over 10 years catering to several weddings, anniversaries, and special occasions. Bill loved his City of Rockford where he served four terms as Alderman of the 9th Ward from 1997 to 2013. As an Alderman, Bill spent countless hours canvasing his Ward looking for ways to improve the roads, traffic signals, and to help bring new business-like Walmart to his neighborhood. Community safety was also very high on his list as was evident by the overwhelming support he received from Rockford’s First Responders each time he ran for re-election. Bill was adamant about supporting local businesses, many of you would see him daily at breakfasts or dinners siting at his favorite tables and speaking to everyone about their troubles or suggestions on how to improve the city. Rockford will miss Bill Timm dearly. He was a well-known car buff and a member of the Automobile Association of America and the Blackhawk Region Antique Car Club. Bill could be seen driving his 1948 green Dodge around town stopping to visit with friends and neighbors. He never met a stranger. Bill was a lifelong parishioner at Cathedral of St. Peter in Rockford. He was the Patriarch of the Timm Family always there to lend an ear or tell a story. He was loved by everyone and will never be forgotten. Bill leaves behind his daughters, Nina (Ben) and Connie (Tom); grandsons, Michael and Mark Murphy; sister-in-law, Ginny Schmidt; and several nephews and nieces. He is preceded in death by his parents, William and Rose; his brother and sister-in-law, John and Lori Timm; and brother-in-law, Howard Schmidt.

Mass of Christian Burial at 10:30 a.m. Friday, October 14, 2022, at Cathedral of St. Peter, 1243 North Church Street, Rockford, with visitation from 9 to 10 a.m. Interment to follow in Calvary Catholic Cemetery, Winnebago, IL. A Celebration of Life will be held Thursday, October 13, 2022, from 4 to 7 p.m. at the Venetian Club, 2180 Elmwood Road, Rockford, IL 61103. Arrangements by Delehanty Funeral Home, Loves Park, IL. In lieu of flowers, memorials to the family for a memorial that will be established at a later date.